Graben is a German word geologists use for ground that has dropped between two roughly parallel faults. (Its opposite, ground uplifted between two faults, is called a horst, another German word.) Grabens commonly appear in areas that have been pulled apart by tensional stresses. Horsts would appear where the land has been compressed. (Another compression landform is more common: the wrinkle ridge.)

In some cases, if tensional stresses change direction, a new set of grabens may form at an angle to the first ones. Close examination of images helps scientists determine which graben set is older. They look for which faults cut across which grabens, trying to determine a sequence. Several graben sets may occur in areas where tectonic stresses have changed direction more than once. 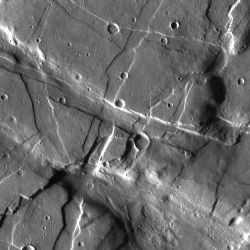