Tholus (THO-lus): A tholus (plural: tholi, THO-lye) is a domed Martian volcanic feature smaller than any of the big shield volcanoes. The flanks of a typical tholus slope more steeply than a shield volcano and some have many channels down the flanks. This suggests they are made of easily eroded materials, perhaps ash. In profile, a tholus looks rounded and partly resembles a volcanic cinder cone on Earth. Tholi often have calderas at their summits that appear large compared to the volcano's size. This has led some scientists to suggest that tholi are ordinary shield volcanoes whose lower slopes have been buried by regional lava flows. 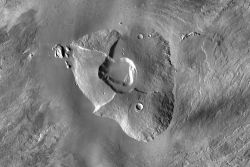