Mars has the tallest mountain in the solar system — Olympus Mons, 21 kilometers (13 miles) high, two and a half times taller than Mount Everest. But it lacks the long ranges of mountains, such as the Himalayas, the Rocky Mountains, or the Alps, found on every continent on Earth. It's reasonable to ask why.

The short answer is that Earth has plate tectonics and Mars doesn't. But what does this mean? Tectonics is the study of earth movements, large and small. It involves the uplift, folding, and destruction of mountain ranges. It includes landslides, earthquakes, rift zones, faults, ocean trenches (on Earth), and geological forces that come from deep inside a planet. Plate tectonics is the movement of large crustal plates with respect to one another.

The plates move — at speeds about as fast as fingernails grow — in response to slow, but powerful convection currents of hot rock in Earth's mantle. Their movements resemble the movement of a conveyor belt. Now imagine all of the plates on Earth moving in a conveyor belt fashion, but all in different directions. Plates will bump against each other, they grind past, crumple into, fracture, ride or slide over one another, and even dive (subduct) into the mantle. As they do, they cause mountains to rise, ocean trenches to sink, volcanoes to erupt, giant rifts to form, and entire continents to move.

As far as scientists can tell, plate tectonics as a process exists only on Earth.

Olympus Mons is a volcano that grew (and grew and grew) in one place on Mars because it was fed by a long-lived volcanic eruption center. And because Mars has no plate tectonics, the crust where the volcano first erupted never moved away from the volcanic source. The result was a huge and heavy stack of lava rock.

Moreover, the volcanic activity that built Olympus Mons, also built numerous other big volcanic structures nearby. And beyond just the large volcanoes themselves, the entire region, 5,000 km (3,000 mi) wide, stands elevated some 10 km (6 mi) over its surroundings.

Why there and not someplace else? No one knows. In any case, scientists call this volcano-rich area the Tharsis bulge, the Tharsis plateau, or simply Tharsis. Scientists estimate that Tharsis was nearly complete toward the end of the Noachian Period, roughly 4 billion years ago.

Tharsis dominates the tectonics of Mars. It has bent down the crust of Mars under its weight, like pushing your fist into an inflatable ball. The deformation has compressed the crust in a radial direction and it has made tensional (stretching) stresses in a circular pattern surrounding Tharsis. Both kinds of stresses have caused faults and fault-related features for thousands of kilometers. Besides various kinds of volcanoes, common landforms found in and around Tharsis include grabens, wrinkle ridges, pit craters, and volcanic dikes. Each provides a clue as to the forces operating when it occurred. 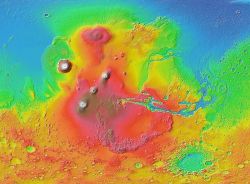 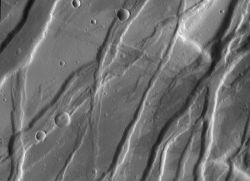