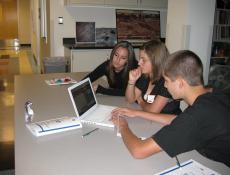 Each student team is given the opportunity to target an image of Mars using the THEMIS camera on Mars Odyssey Spacecraft as part of their project. This step is typically used as an additional data point in the team research to be added to data collected from JMARS. Teams have the option to target an area that has already been imaged, possibly looking for changes in that surface over time (longitudinal study), or target an area that has never been imaged before (missing data sets). Either way, student teams will be adding images to the existing Mars THEMIS image database and these images could be used in the future research of other scientists.
Targeting typically occurs between the proposal acceptance and the final report phase. Teams will notify their MSIP coordinator when they are ready to target an image. An MSIP coordinator will send the facilitator a targeting link containing 3 days worth of orbits (36 orbital tracks) on Mars. Teams “shop” these orbital tracks and submit their target to the MSIP coordinator.
Once the image has be taken by THEMIS and processed by the Data Archivist in the Mars Space Flight Facility, the MSIP Coordinator will complete an Image Download talk with the team and in a live image download event either on-site or using the distance learning software.