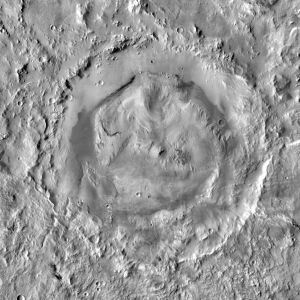 Gale Crater is 154 kilometers (96 miles) wide and it contains a 5-km (3-mi) high mound of layered sediments, which is a primary target for Curiosity. The mound is dubbed Mt. Sharp by scientists, who estimate the crater formed by a massive impact 3.5 to 4 billion years ago.

The mosaic, a product of the Mars Space Flight Facility in the School of Earth and Space Exploration at Arizona State University, is at: http://jmars.mars.asu.edu/maps/gale/gale.html.

This page also includes a link to download a .PNG copy of the whole image. (Caution — with a file size of 325 MB, downloads will be slow.)

The Gale Crater mosaic is woven together from 205 individual images, the vast majority of them THEMIS visual-wavelength images. (A few small holes were filled temporarily with images from the Context Camera (CTX) on Mars Reconnaissance Orbiter.) Such THEMIS images reveal details as small as 60 feet (18 meters) in size.

Because all the mosaic's images were taken before Curiosity landed, the rover is naturally not in the scene. In addition, although Curiosity is the largest payload ever sent to the Martian surface, the 10-foot-long rover is too small to be seen by THEMIS.

"The THEMIS images were taken throughout the whole mission," says Jonathon Hill, the Mars researcher at ASU who assembled the mosaic. "A lot of them were taken recently, after we started specifically targeting Gale when it became one of the possible landing sites. But other images go back nearly to the beginning of the mission in 2002."

In all, he says, it took about two and a half weeks to put it all together. "The thing that made it take so long was that when you blow the image up that big, or when you zoom in that much, any misalignment of the images becomes very obvious." In the end, he had to align and custom fit most of the frames manually.

While the mosaic is fun to explore, it also has a scientific use. As Hill explains, "The reason we decided to assemble such a large, comprehensive mosaic of Gale Crater was to give ourselves a better sense of the context around the landing site. This will help us to better understand what Curiosity sees and measures as it roves the surface."