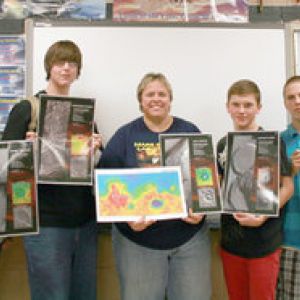 CLEVELAND, TN (Joyanna Weber, Banner Staff Writer) -- Bradley Central High School physics and chemistry students in Dr. Barbie Buckner’s classes are experiencing what it might be like to work for NASA while studying the scientific method.

Through the Mars Student Imaging Project, students have been given access to the digital imaging program used by NASA scientists to study Mars.

The project is a collaboration between NASA and Arizona State University’s Mars Education program. Classes work to formulate a research question and target an area of which they want the camera to take a picture.

The project came to a climax for Buckner’s fourth-period class Friday, when the image of an area never before photographed was revealed to the class.

The image had only previously been seen by the person who rendered the image. The reveal was made possible through a video conference call with Jessica Swann of the Arizona State program. “There is one person on this planet who has seen your image. Only the data archivist who processed your image,” Swann said before the image was revealed.

Students started working on the project after Labor Day. The fourth period’s research question was to determine if the width of secondary cracks on the surface of Mars was related to the length of a primary crack. The class’ secondary interest was cracks in relation to craters.

Student Chris Long said determining where on Mars to target an image was a long and detailed process. In the end, the class voted on the final location.

Images and data were used to determine areas of Mars that had not previously been targeted. Erick Mitchell described seeing the image for the first time as “breathtaking.” Long said seeing the image was “rewarding” after all the work which was put into the project. Before seeing their image, the students studied fissures from previous images and used a NASA computer program to determine their length and width.

During the video call Friday, Swann explained the complex process of how the picture was taken and rendered.

Then, she emailed Buckner a copy of the image for the students to keep. The images will not be released to the public for six months. The image will be accessible on the THEMIS (thermal emission imaging system) website as V48540002.

“Bradley Central High School - Period 4” will be named the team responsible for targeting the area where the image was taken. THEMIS produces extremely detailed images of targeted sections of MARS’s surface. The class’ image was one of the first taken with the B-side camera on the satellite.

This unique opportunity came to the students as a result of Buckner’s attendance of the National Mars Education Conference, where she heard about the Mars Student Imaging Project.

“To me this is real life. This is what it’s like,” Buckner said.

Swann said the experience could be valuable to students in the future.

“In the grand scheme of things, there’s not a whole lot of students who can have the ability to say something as unique as, ‘Yeah, I’ve done authentic scientific research.’... It makes you very advertisable,” Swann said.

She said it also shows the students have experience working on a team. However, the work isn’t over for the possible future scientists. Students will give a final presentation on their research with a NASA scientist. The classes’ technical report could also be chosen to be featured on the Mars Education Program.

Students will plot the lengths of secondary cracks and main ones. Buckner said BCHS is the only school in the state of Tennessee to participate in the program.