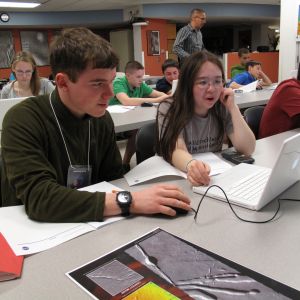 Letting secondary school students use an operating NASA spacecraft to take images of Mars is about as hands-on as science education can get. Nor are the students just aiming the space camera randomly. Instead, they are targeting an image on
the Red Planet's surface to answer a scientific question about Mars that the students themselves have developed.
That's the exciting premise of the award-winning Mars Student Imaging Project (MSIP). A key component of NASA’s Mars Public Engagement Program, MSIP is led by Arizona State University's Mars Education Program. This week the prestigious journal Science, published by the American Association for the Advancement of Science, is announcing that this innovative, student-focused project will receive the Science Prize for Inquiry-Based Instruction.
At Arizona State University, Sheri Klug Boonstra directs the ASU Mars Education Program under the mentorship of Philip Christensen. He is the principal investigator for the Thermal Emission Imaging System (THEMIS), a visible and infrared camera on NASA's Mars Odyssey orbiter. He is also Regents' Professor of Geological Sciences in ASU's School of Earth and Space Exploration, part of the College of Liberal Arts and Sciences on the Tempe campus.
The Mars Student Imaging Project began in 2002, when Christensen made THEMIS instrument time available for students in grades 5 through early college who enroll in the science class project. Since then more than 35,000 students nationwide have participated. The schools have been public and private, urban, suburban, and rural, and of all sizes, grade levels, and student abilities. In an event that made headlines internationally in 2010, a 7th-grade MSIP class in rural California discovered a cave on Mars previously unknown to scientists.
"As a kid, I was very interested in space, but there was no way for me to participate," says Christensen. "So when NASA put Mars Odyssey and our THEMIS camera in orbit, a lightbulb went on. At last we had an opportunity to let students participate – and to trust them to do real science."
The central idea, says Klug Boonstra, revolves around inquiry-based learning. "Students in an MSIP class develop their own research question about Mars. They identify where on Mars to take an image to answer that question, and then they target the THEMIS camera on Mars Odyssey to take the image."
But that's just the beginning, she explains. "After the image is sent to Earth, the students analyze it and many other THEMIS images, collect data from them, and develop an answer to their question." Finally, she says, the students present their answer to a symposium of working Mars scientists for comment and critique.
The entire process vividly teaches students how real scientists do science by leading them through the same process that the professionals follow.
Klug Boonstra says that students today – far more comfortable with technology than previous generations – love knowing that they can do real research, rather than lab exercises that just repeat what's already been done. "They want to know that there are still things left for them to discover," she says. "Here are kids in middle school with the capability to discover something in real life. Kids today want that kind of chance at something extraordinary."
"At a time when the U.S. critically needs to develop the next generation of scientists and engineers, such student-led discoveries speak to the power of engaging students in authentic research in their classrooms today," said Jim Green, director of NASA's Planetary Science Division in Washington, D.C. "Not only is the chance to explore Mars motivating, it shows students they are fully capable of entering challenging and exciting STEM fields." STEM stands for science, technology, engineering, and math.
"The Mars Student Imaging Project is a perfect example of how NASA can use its missions and programs to inspire the next generation of explorers," said Leland Melvin, NASA associate administrator for education. "If we want our students to become tomorrow's scientists and engineers, we need to give them opportunities to do real-world — or in this case, out-of-this-world — scientific research, using all of the tools of 21st century learning."
Over the years, the MSIP curriculum has evolved to stay in step with national standards for STEM education. It is carefully structured to enable teachers and students without much knowledge of planetary geology to have successful experiences.
"You don't have to be a planetary geologist to be successful," says Klug Boonstra. "We want teachers to feel completely comfortable responding to a student's questions by saying, 'That's a great question. I have no idea what the answer is.' The teacher doesn't have to be a know-it-all."
In addition, says Klug Boonstra, "while MSIP is specifically involved with Mars, the project allows many avenues of investigation that connect with traditionally taught disciplines such as earth science, biology, and chemistry. It's an immersive project with incredible benefits in terms of students understanding both science and the process of science."
Link to Science Magazine full article http://www.sciencemag.org/
Robert Burnham, robert.burnham@asu.edu
(480) 458-8207
Mars Space Flight Facility