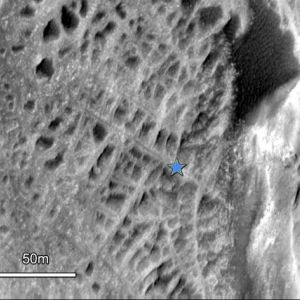 The discovery of box-like geologic structures on Mount Sharp centered in Curiosity's Gale crater landing site, is raising interest for rover exploration as potentially habitable for past life on Mars.

New studies also indicate that three deep lakes existed in Gale crater eons ago, increasing the potential for lake dwelling microbial life to have existed in those environments as well.

The science and engineering teams for the rovers Curiosity and Opportunity are winding down operations in preparation for solar conjunction between April 4 and May 1, when the Sun blocks Earth's view of Mars. No significant commands can be sent to or received from the two rovers during that period.

Large geologic box-like structures discovered by the Mars Reconnaissance Orbiter on Mount Sharp 2,887 ft. (880 m) above Curiosity could have possessed habitable conditions, and the mission team hopes the rover will eventually climb to reach them. Blue star denotes spine of feature. Credit: NASA/University of Arizona/JPL-Caltech.